Tucker Peak is the twelfth book in the Joe Gunther series of procedural detective novels by Archer Mayor. Set in Vermont, the series surrounds detective Gunther with a varied cast of competent misfits who he molds together into a crack investigative force. Sammie Mar 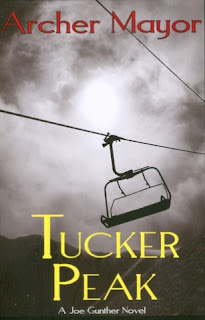 tens, the attractive and driven woman on his squad, supplies a daring enthusiasm coupled with quick and forceful decision making, which is not always well thought out before she goes into action. One armed Willie Kunkel brings seething inner anger, deep self doubt, and an eye for the depths of human depravity. Gail Zigman, Joe’s long-time girlfriend and companion, often working from the sidelines gives Joe the political cover and connections he often needs to be successful. The books dig beneath the country charm of rural Vermont to reveal an often ugly reality of drugs, crime, and the urge for power hidden from the tourists who admire the mountains from their cars or the views through their picture windows.

The Joe Gunther character is a relative rarity in detective fiction these days. Joe isn’t a very sexy guy, nor is he brilliant. He’s a hard working, almost stodgy professional policeman who achieves his goals by hard work and careful policing. Once or twice during each book he is forced by the situation to become a man of action and performs well, although he is usually the worse for wear after triumphing over adversity. His long-term relationship with Gail is much the same. Both are happier when they are close, but not too close, together. They’re comfortable with each other, but each requires space, privacy, and independence.

Joe Gunther has recently become the number two man in the VBI (Vermont Bureau of Investigation) a newly created police agency designed to tackle major crimes at a statewide level. This agency, which apparently doesn’t exist in Vermont, gives Archer Mayor the advantage of allowing Joe Gunther a much wider theater of operations rather than having to be based in Brattleboro and loaned to other agencies on an as needed basis. Gunther can now be involved in a wider and more interesting variety of crimes taking him anywhere in the state. In fact, he’s also had forays outside the state. In Tucker Peak Gunther is called to investigate a robbery in a ski area condo because the victim threatens the local police chief with calling the governor. Quickly, the investigation expands as a murder ensues, local environmental activists appear to be sabotaging projects on the ski mountain, and there are intimations of drug sales. All this is placed within the context of the bust or boom economy of the ski industry in Vermont. Brought together, it makes an intriguing and exciting story that culminates in one of the skillful chases Mayor 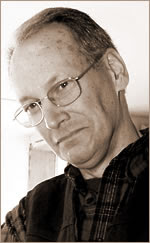 For some reason, Mayor’s previous publisher has decided not to continue maintaining a back list of his books. He has undertaken to publish them himself under the imprint of AM Press. The books are being printed in a very handsome trade paperback format and sold through the bookstore at Mayor’s web site at $14.95. They can also be ordered through your local independent bookstore. While each of the Joe Gunther novels stands alone, I always find it enjoyable to read a series in chronological order because it allows me to follow the growth of the character over time. If you’re new to Joe Gunther, take a look at the early books. If you know Joe, but haven’t reached Tucker Peak, it’s a good mountain to try. Mayor’s most recent novel is Chat, which I expect to review in a few weeks. Meanwhile, consider supporting this very fine writer who has fallen victim to the needs of the major book store chains for huge sales rather than continuing to be satisfied with good, steady sales by reliable authors.