The Nine by Jeffrey Toobin

THE NEW YORK TIMES HAS JUST ANNOUNCED THAT THIS BOOK WILL BE NAMED ONE OF THE TEN BEST BOOKS OF 2007 IN THE DECEMBER 9TH ISSUE OF THE BOOK REVIEW.
From time to time a book comes along that sheds light on big questions about “how things work.” The Brethren by Bob Woodward, written in 1979, pried open the doors on the Supreme Court to shed light on the Burger court and how it operated. The Nine, by New York 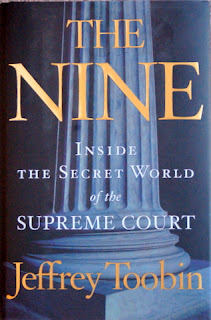 er writer and CNN correspondent Jeffrey Toobin, does the same service in depicting the issues and personalities on the Court as it has moved from the relative liberalism of the 1990’s into the present generation of conservatism under the leadership of George W. Bush and his appointees Chief Justice John Roberts and Samuel A. Alito. In taking on this challenge, Toobin has provided a fascinating glimpse behind the usually closed doors of the Court into the tensions and differences existing between and among the justices that work to clarify or muddy the world we live in.

Toobin places Justice Sandra Day O’Connor at the center of the Supreme Court’s decisions during much of her tenure on the Court, citing her almost unerring ear for the center of the country’s mood rather than the high quality of her judicial reasoning. Thus she managed to hold together much of Roe v. Wade in the face of right wing pressure to overturn this insult to evangelical Christians and other conservative religious groups. Later she deeply regretted her position in Bush v. Gore as the Republican Party she so loved moved further rightward and further away from the Constitution in response the President Bush’s drive to battle against what he characterized as “the war on terror” and the errors of “activist” judges.

Toobin’s usually measured prose and careful discussion of the issues, as one might expect of a media personality educated at Harvard Law School, describe the movement of the Supreme Court from a generally liberal understanding of a changing Constitution responsive to changes in the country toward a much more restrictive and conservative view of the document as the nation’s mood moved further to the right. Of particular interest is Toobin’s discussion of how movement conservatives, those committed to radically moving the Supreme Court towards the right to achieve their goals regarding extending executive power, increasing the acceptance of religion in public discourse, ending racial preferences, speeding executions, and achieving their highest priority, ending legalized abortions by overturning Roe v. Wade. These changes were initiated during the Reagan administration, forwarded by the efforts of The Federalist Society, a group of conservative law professors at major law schools, and kept alive in right wing circles by two unlikely proponents Jay Sekulow of Jews for Jesus and Manuel Miranda (It’s not possible to invent a more ironic name for a major player in the move to the right!) who developed a vast computer-based mailing list to energize the conservative base. These goals of the far right were achieved with the elevation of John Roberts and Samuel A. Alito to the Supreme Court, creating a consistent 5-4 majority and quickly overturning many actions of previous courts, some having precedents going back over 100 years.

Whenever the secrecy of the Supreme Court is penetrated, court watchers enjoy speculating as to which justices made themselves available to the author. In the case of The Nine it isn’t too difficult to guess. It appears that Sandra Day O’Connor, feeling betrayed by the president her vote assured election in Bush v. Gore, speaks out as do, apparently, Justices Breyer and K 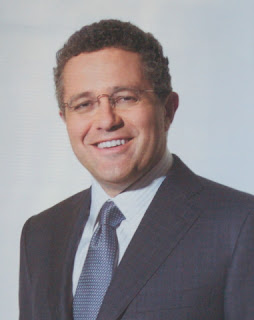 ennedy. It’s also pretty clear that Scalia and Thomas had little to say to Toobin. Nevertheless, Toobin’s book is filled with insights into how the background and development of each justice has contributed to their court contributions, formal and informal. Other players, like Alberto Gonzales and Harriet Miers also are carefully, if briefly, considered. Altogether, the picture of smart people with big egos placed on a stage where their every word counts is both enlightening and concerning.

Perhaps the greatest attraction of this important book is Toobin’s marvelous skill as a story teller. His narrative is well structured, beginning and ending with a scene on the steps of the Supreme Court. His portraits paint the picture of a court claiming to represent the will of the Founding Fathers in their writing of the Constitution while reflecting the ebb and flow of politics in America. The Court stands as a lagging indicator, because justices appointed for life often outlive the national mood that led to their installation. The triumph of George W. Bush may lie in the longevity of his two appointments to the Supreme Court, but only time, as with so much concerning the Court, will tell.

The Nine: Inside the Secret World of the Supreme Court by Jeffrey Toobin, Doubleday, 2007 costs $27.95 at bookstores everywhere.